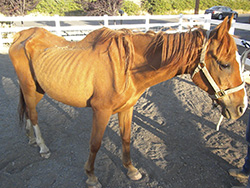 On a hot summer day in 2012, the Sonoma County Animal Services Department contacted CHANGE to pick up a severely emaciated gelding in West Petaluma. Little did we know that this little chestnut Arabian in his mid-twenties would be among the most emaciated horses that CHANGE has encountered.

Blaze was so severely emaciated that he would not move unless prompted. He stood completely still like a statue--barely even blinking his worried eyes. He must have known that he was down to his last few calories and that every little bit of energy counted.

Despite the valiant efforts of the CHANGE foster barn and volunteers, Blaze succumbed to starvation just a few hours after he was transported to a rehabilitation facility. He had lost nearly 50% of his body mass, a critical number which spells a grave prognosis.

Although his time with us was short, his impression is lasting and reminds us of the physical limitations that the body sets regardless of mental determination or will to survive.