Rosie is a kind and gentle bay mule who was brought into Sonoma County Animal Care and Control along with her friend,  Scarlett, early March, 2014. Rosie was kept in poor condition for several years, but thanks to the diligent work of SCACC, she went into a CHANGE foster barn where she underwent rehabilitation. She is now adopted! Congratulations to Dorian and Philip on their adoption of Rosie!

Rosie is an incredibly sweet molly mule, 25-30 years old. Rosie has excellent manners and is a joy to have around. She LOVES attention of any kind and will stand for hours to be brushed and fussed over. Rosie loves getting kisses on the lips! She was one of the most kissable, huggable equines we ever had in foster care.

Although Rosie had a long history as a riding mule, she was not sound enough for riding. She was looking for a home as a companion mule to another medium to easy keeper equine. Rosie has mild arthritis in her knees and she would thrive best on 24/7 turnout, but she's also happy spending some time in the barn. Rosie gets along nicely with other mules and horses (and they love her), and she likes dogs. She would be fine for a more beginner handler. Rosie has tested negative for Cushings disease. Rosie bathes, leads beautifully, ties, loads and trailers. She is up to date on her vaccinations, worming, dental and feet. She has all of her teeth, and they are in very good condition, so at this time she does not require any special feeds or supplements. The vet said Rosie could easily live another 10 years! 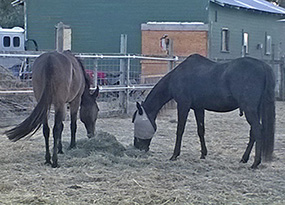 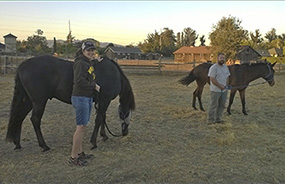 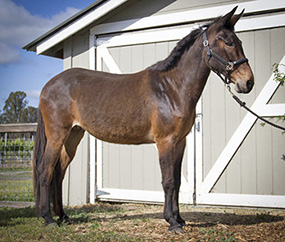 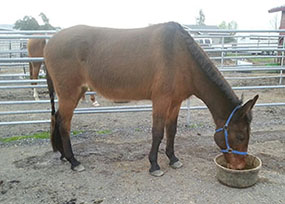 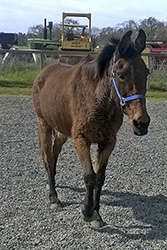