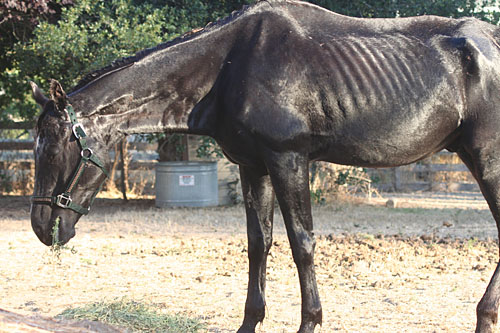 A black Quarter Horse gelding of unknown age, Blackie was found tied to a fence post on a 100-degree day. He was severely dehydrated and emaciated. A few days after his rescue, Blackie succumbed to medical complications and was euthanized. His rescuers—a veterinarian, a retired police officer and a horse owner—saw Sonoma County Animal Control’s need for skilled assistance with equine cases and founded the non-profit Sonoma CHANGE Program as a support network for AC to call upon. Blackie's story enraged the public and captured the attention of the media.

A subsequent reward fund led to the identities of Blackie's former owners, both of whom were charged with animal cruelty. Although one defendant eventually pled guilty, the other has maintained his innocence and his case is currently making its way through the legal system. The CHANGE Program provides gratis expert witness assistance to the prosecution team for Sonoma County District Attorney's office.