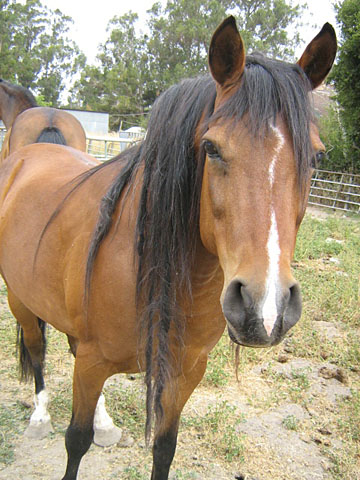 Athena was a stunning 18-year-old Quarter horse/Arabian mare who spent her entire life in squalor at the hands of a Penngrove animal hoarder.

Her eyes were severely damaged by uveitis and glaucoma, chronic conditions that can be sometimes be managed with veterinary care. Untreated, these diseases caused Athena to become blind and left her in constant pain.

Athena was lost in a dark world that made her fearful, extremely anxious, and dangerous for her human handlers. After just a few days of observation and one-on-one care, the CHANGE Program made the heartrending decision to humanely euthanize her.

Athena's owner was convicted of felony animal cruelty and barred from owning horses for three years. Her other horses, Argus, Bobby, Destiny and Sammy, entered CHANGE Program foster care and were rehabilitated and adopted into loving, permanent homes.