Jerome enjoyed a long life and knew that during the last six years that he was loved. Thank you to Kate, Suzie, Jane, Susan, and all of the people who helped to care for him. He was a tremendous life force and kept moving forward without an ounce of self pity, right up until the day he transitioned.

Jonathan Garcia, an East Bay handyman, was sentenced to jail and probation on Dec. 8 for dumping Jerome on a country road. Garcia abandoned him in July 2015 off Lakeville Highway in Petaluma.
The sweet senior gelding was emaciated and in severe pain due to nail that had penetrated his hoof. Jerome was found hobbling down the road by a good Samaritan who called authorities. The horse was seized by Sonoma County Animal Services, then transported to a CHANGE Program foster home for medical and rehabilitative care.
He was later fully restored to health and adopted by a Bodega Bay woman. “We couldn’t be happier about this outcome,” said Executive Director Heather Bailey. “This sentencing shows that animal cruelty will not be tolerated in our community.” Garcia, of Pinole, Calif., who earlier plead no contest to felony animal cruelty and misdemeanor abandonment charges, was sentenced to six months in jail, three years of probation (during which time he is prohibited from owning equines), 100 hours of community service, and must pay thousands of dollars in restitution to CHANGE, Sonoma County Animal Services and the courts.
Garcia is scheduled to turn himself in to begin serving his sentence, or an approved jail alternative, in January 2017. “It is rare for an animal cruelty defendant to receive jail time,” said CHANGE Program Vice President Katie Moore. “It really shows the level of criminal behavior which occurred.”  Moore submitted a statement to the courts on behalf of CHANGE and Jerome; the letter was read in court by Judge Thistlethwaite, who declared Garcia’s behavior “reprehensible.” “Mr. Garcia….chose to discard Jerome by dumping him on a country road like garbage,” said Moore. “Not only was this inhumane and confusing for a sweet old horse in pain, but it also put human lives in danger.” “It is because of the unique partnership that exists between CHANGE, Animal Services, and the District Attorney’s office that outcomes like this are possible,” Bailey said. “It’s all about team work.” Jerome is featured on the cover of CHANGE’s 2017 Hotties with Heart calendar, posing with a volunteer model.  Proceeds from calendar sales fund medical and foster care for horses like Jerome who are victims of criminal animal cruelty.“ The pain and neglect Jerome suffered was almost unimaginable,” said Bailey. “But as anyone who buys a calendar will see, he’s made a full and complete recovery.” 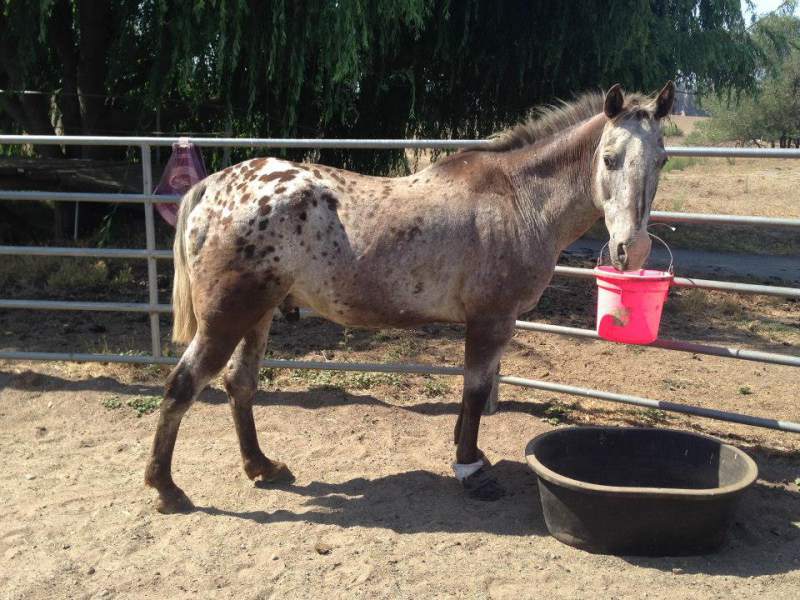 Jerome is a personable, friendly and highly intelligent Appaloosa gelding that entered the CHANGE Program in late July. He was found by a citizen taking her morning walk on a rural street off of Lakeville Highway in Petaluma. Jerome was emaciated--all of his ribs could be counted and his entire backbone was clearly visible. To make matters worse, he could barely walk because he could not bear weight on his left front foot. But he knew that he was in trouble so he tried his best to follow the woman. She stayed with him and comforted him while help arrived. When law enforcement arrived on the scene, the officer immediately picked up his sore foot to find a roofing nail buried up to the head in the sole of his foot. He was taken immediately to a skilled CHANGE foster barn where he received emergency veterinary care, much needed love, attention, and FOOD! If you have any information about this horse, please contact Sonoma County Animal Services at 707-565-7100.  Jerome is in his mid to late twenties by dental estimates and clearly knows the ropes in life.  His story is waiting to be told- do you have a piece to this puzzle? 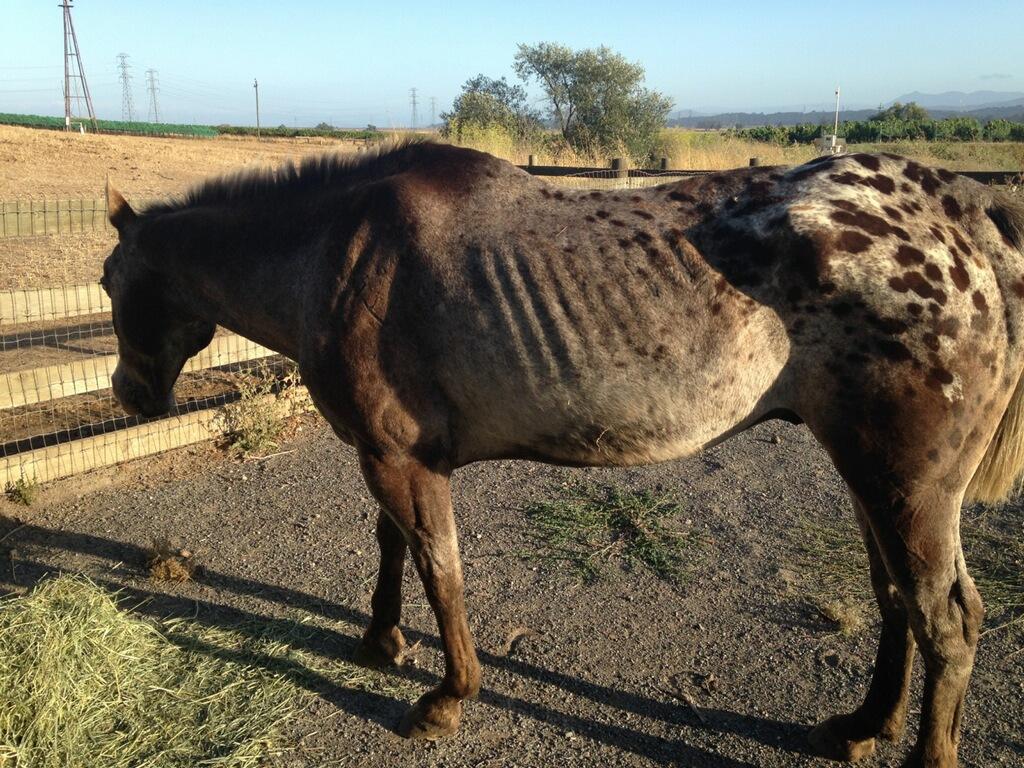 Great news! Jerome is gaining weight, and the infection in his foot caused by a deeply embedded roofing nail is healing. After only 10 days, he has put on a noticeable amount of weight and his pain level is down thanks to intense medications and therapy for his foot. He is surrounded by a team of loving and attentive CHANGE volunteers--and boy does this horse LOVE attention! He is being fed mashed pellets several times per day and continues to receive daily foot treatments to manage the infection in his foot. Jerome has spunk and life skills; he doesn't seem to want to give up quite yet! His optimism is infectious, and everyone who spends time with him comes to adore him within minutes!  Stay tuned for more updates and also follow Jerome's case on the CHANGE Facebook page.  If you have any information about Jerome including possible leads of past owners, please contact Sonoma County Animal Services at 707-565-7100.

It was a big day for Jerome today!  He had his feet trimmed, teeth powerfloated, bloodwork done, and other "spa day" procedures.  True to form, he was cool as a cucumber and behaved like a pro throughout.  He is gaining weight thanks to a good quality diet and excellent care by his foster barn family.  He is on his way to being one happy healthy guy again!