Scarlett was a lovely, sweey, gentle older mustang mare that entered CHANGE after a terrible ordeal in the summer of 2019 in which she was abandoned in a parking lot in a cramped dilapidated horse trailer in the July heat. We were able to research her freeze brand and we have learned that Scarlett was gathered off of the Goldfield HMA in the Battle Mountain District of Nevada by the Bureau of Land Management. She was gathered in a water trap on September 15, 1994 as part of an emergency BLM gather because the horses did not have enough feed or water and were very thin. The BLM then moved her to a preparatory facility in Ridgecrest, CA where she was then adopted out.

Below documents the work that CHANGE did to try to rehabilitate Scarlett and her herd mate Meera, after only a few months in the CHANGE Program. Meera made a great recovery, but Scarlett had too many advanced health issues at the age of 26 to overcome. We always strive to make sure our horses have a good quality of life and that their pain and illness issues are addressed. In Scarlett's case, her issues were too advanced for her to lead a reasonably good life and so our board, with heavy hearts, elected euthanasia in February, 2020. 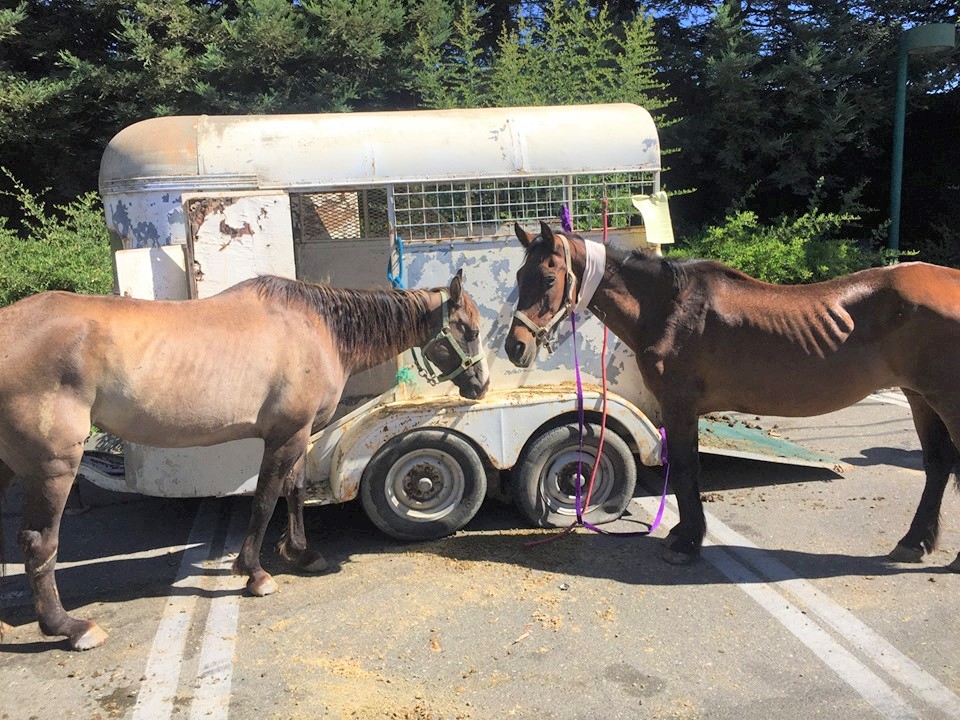 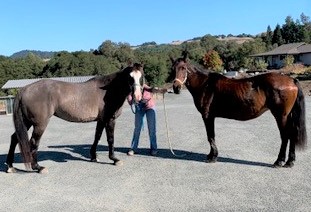 After her recent veterinary visits, Scarlett looks much better. She has gained weight and has an amazing sheen to her coat! 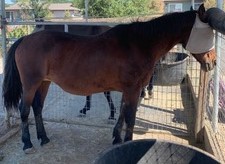 Scarlett is a 24 year old Mustang mare with a freeze brand on her neck to prove it. She came into the CHANGE Program shortly after being taken into custody by local law enforcement when she and another mare were found abandoned in a horse trailer in the Home Depot parking lot in Windsor, CA  on a hot July day. She and her companion stood in the trailer patiently for help for approximately 18 hours without food and water in 90 degree temperatures. Scarlett is a very sweet mare and has tried hard during her rehabilitation at a CHANGE foster barn. In addition to receiving extensive daily skin and eye care treatments, she has also needed help with an arthritic knee. Scarlett received powerfloat by a CHANGE program veterinarian as well as vaccinations and deworming in August. During the powerfloat, it was discovered that her lower front premolars were so overgrown and sharp, that when she closed her mouth, the sharp pinnacles actually had poked holes in the roof of her mouth, causing excruciating, continual pain. After her powerfloat, she immediately began to eat better and gain more weight. Here are photos of Scarlett when she came into CHANGE, as well as photos of the holes in the roof of her mouth found during her oral examination. 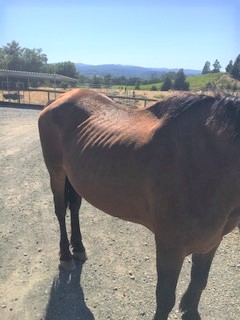 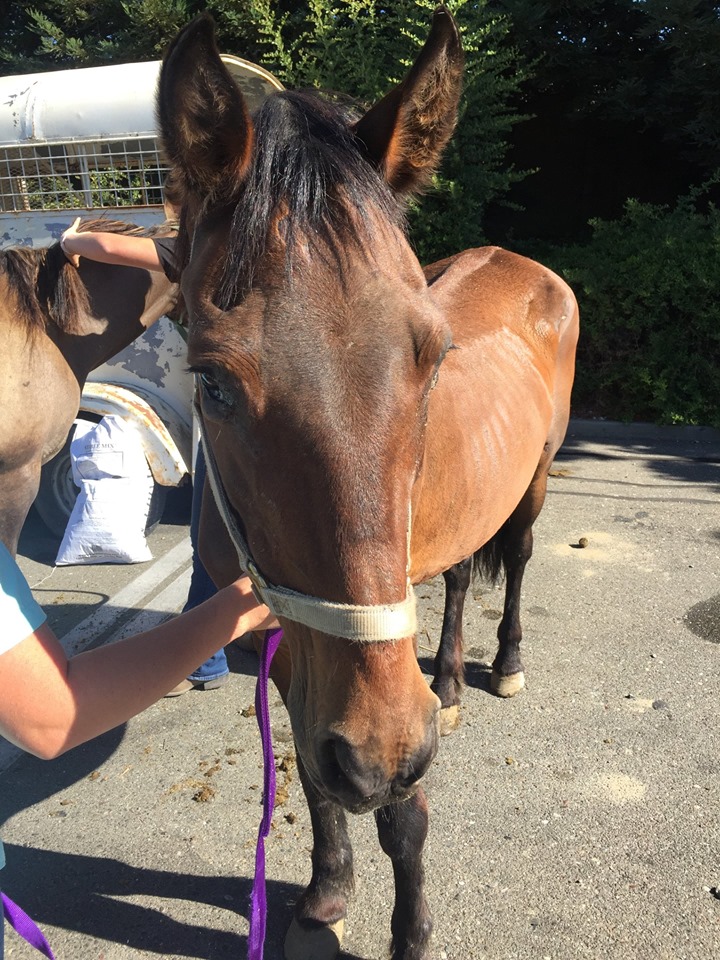 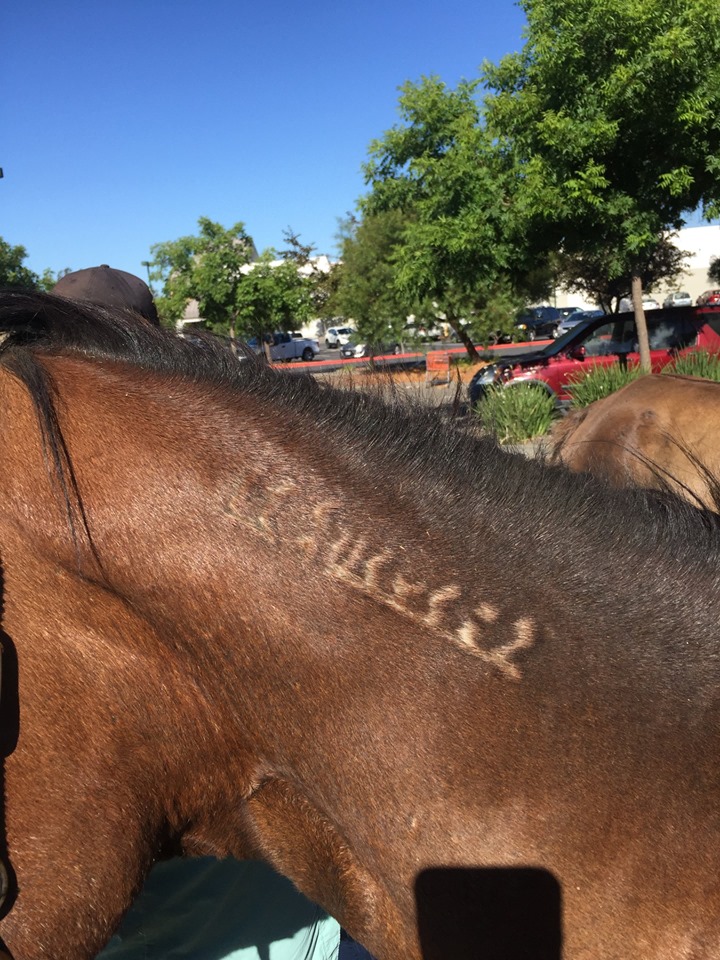 NOTE: Overgrown lower front incisors (the two teeth sticking up on either side of the tongue) 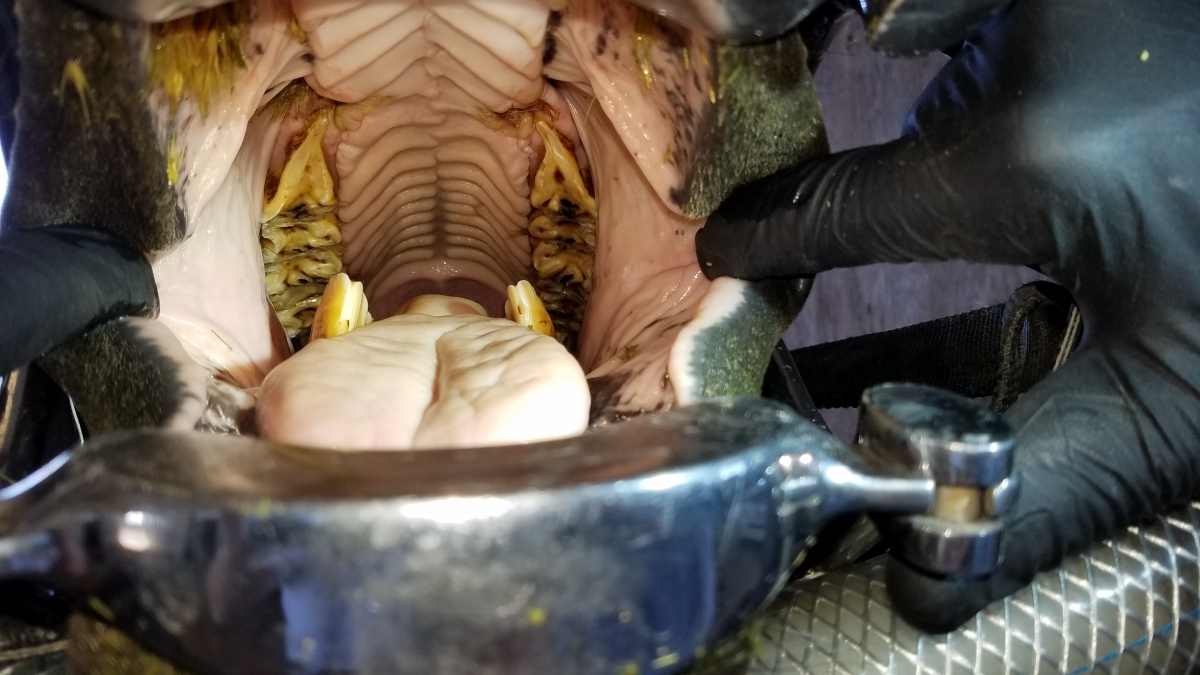 NOTE: Holes in the roof of Scarlett's mouth from the lower front incisors poking into it constantly.

Here is a photo of Scarlett after being cared for at a CHANGE foster barn for a few weeks: