UPDATE OCTOBER, 2022: Congratulations Kit for making Buck a member of your family! We are so excited that he has found a new mom!
------------------------------------------------
Buck is a 20+ year old Paint stallion (now gelding!) who was abandoned in the hills of east Cloverdale on March 14, 2022 and was never claimed by an owner.
Buck arrived in CHANGE foster care with a serious medical condition called paraphimosis, which means his penis became paralyzed and unable to retract into its protective sheath. Paraphimosis is always a medical emergency. Buck was immediately transported from his CHANGE foster barn to Petaluma Equine Hospital for urgent medical care.
Unfortunately, the condition was a longstanding one for Buck, with evidence suggesting he had lived this way for several months prior, and the only option to save Buck's life was a seldom-performed surgery called a "phallopexy." This procedure uses heavy sutures to anchor the paralyzed penis permanently into a healthy position within the sheath. Horses with a successful phallopexy can go on to live normal lives.
On March 28, Buck was deemed stable enough for surgery. Dr. Russ Sakai of Petaluma Equine hospital performed the phallopexy and a closed castration under general anesthesia. The surgeries went well, and Buck recovered nicely from the anesthesia (always a risky thing with horses). Unfortunately, when he stood up from surgery, gravity pulled his penis down further than the surgeon had anticipated. Buck was taken back into surgery two days later, and a succession revision was performed. (See photos below)
Buck made it through the initial risky days following surgery well, and transitioned to being a gelding like he was meant for it all his life. He is an incredibly sweet and friendly horse who loves being around people, and who has a penchant for peppermints. Buck continued his surgery aftercare and further rehabilitation at Petaluma Equine Hospital and its sister facility Circle Oak Equine, where he captured the hearts of the staff who cared for him.
Buck is now in the final stretch of his post-surgical rehabilitation period and will soon be looking for a forever home. Our ideal home for Buck would be someone who owns their own horse property and has the skills needed to help Buck continue his journey as a new gelding. Buck would like to primarily live in pasture, as he has spent much of his life in confinement due to being a stallion. As a result, Buck cribs and windsucks, so he will benefit from as much freedom as possible. We believe that with time, Buck should be able to share a fence line with other geldings, and likely eventually be out in pasture with them. Buck is easy to handle and groom, he adores people, and he ties, bathes, and trailers like an old show horse. He's just an easy, well-rounded guy who is a pleasure to have around. 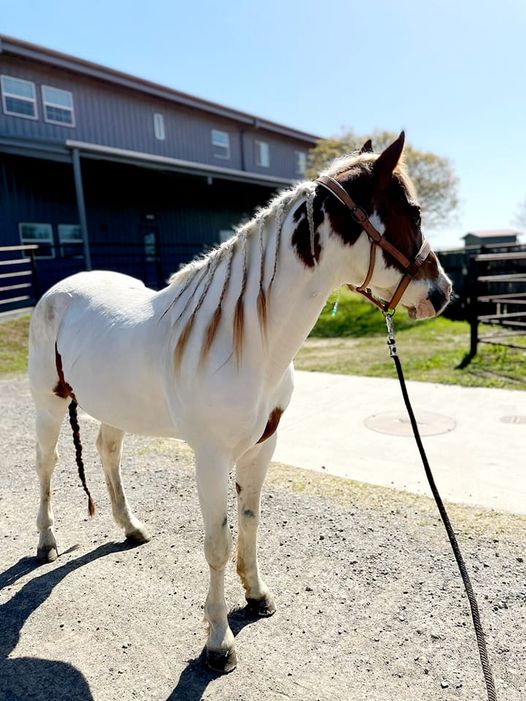 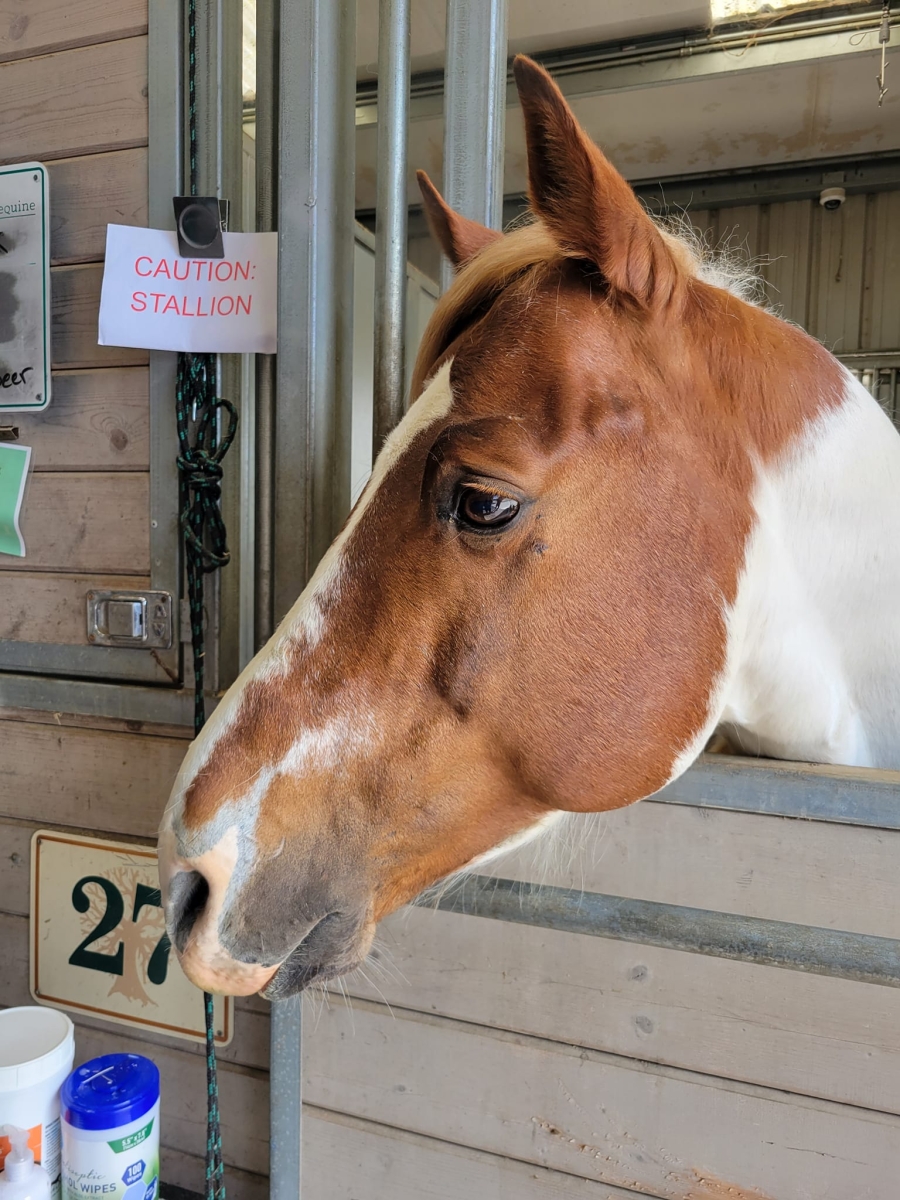 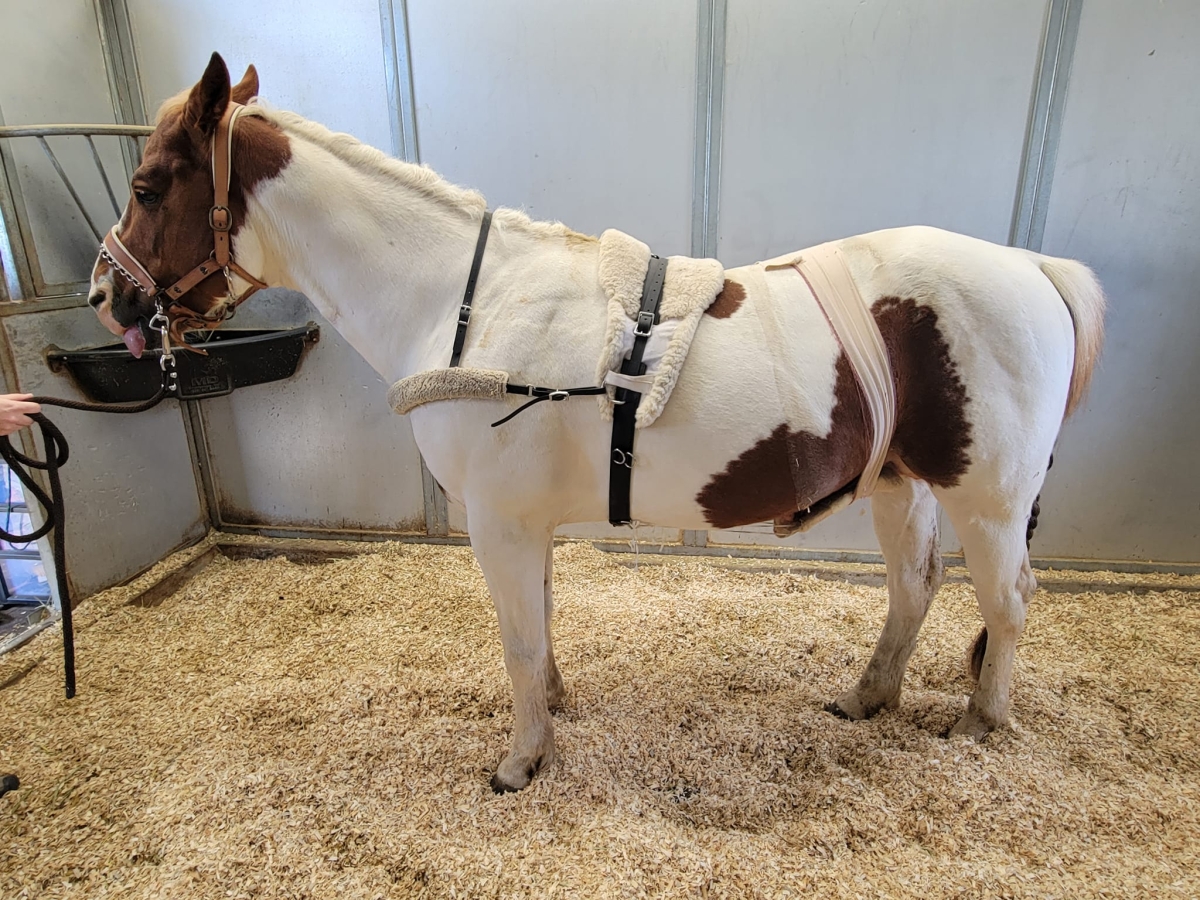